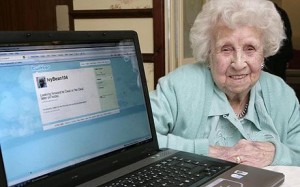 Who is the oldest Twitter user on record? You probably have heard of her, 104-year-old Ivy Bean. Just recently, I read all about her online. From mainstream online newspapers to various personal blogs and tech blogs, the topic of Ivy Bean seemed to catch on.

The Telegraph writes about her:

Her first posts have included “Looking forward to Deal or No Deal later,” “just having a cuppa,” and “chicken casserole was lovely, going to have a nod now.”

And she is not the only pensioner at Hillside Manor residential home in Bradford, west Yorks, to be regularly getting online.

Pat Wright, Residence Manager said: “All the residents are taking a leaf out of her book. Four signed up for ‘computer-college’ while others joined Facebook, surf the net and enjoy themselves with ten-pin bowling on the games console.”

Ivy Bean started it all when she was a mere 102 years old. That was when she started using Facebook. Thanks to the members of the Geek Squad, which is a subsidiary of the Best Buy Company, Ivy went one step further in the world of social networking and signed up for Twitter. Since she started, she has gathered thousands and thousands of followers.

So what does tweet about? Just what she does on a daily basis, really. From dominoes to reading newspapers – we get a glimpse of the life of a centenarian living in a nursing home. It’s not all that bad.

Some say it’s just a publicity stunt. Let’s hope not. You can follow Ivy at IvyBean104.