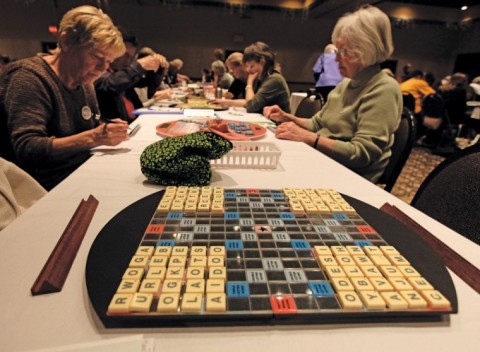 If you’ve never attended a Scrabble tournament, you might feel a little intimidated. Perhaps you’ve heard of legendary players such as Nigel Richards, Joel Sherman, and 2014 national champion Conrad Bassett-Bouchard. These players are rumored to have photographic memories, have practically memorized the Scrabble dictionary, and can win major tournaments with their eyes closed.

But the important thing to remember is that all of them were once beginners. And unless you’re playing in an “open” tournament, you will likely start in the bottom division with others who are new to it, too.

True, many of us started playing Scrabble young. While my sister was struggling with the basics of the violin, I was trying to figure out how to make words out of those 100 wooden tiles. However, many people don’t take up Scrabble until they’re well into our adulthood. You’re in good company.

Here are a few suggestions to make your first Scrabble tournament a happier and less traumatic experience.

1. Play several times in a local Scrabble club before heading to your first tournament. Most clubs are friendly and welcoming to newcomers, which will help you get acclimated to tournament rules in an informal setting before tackling the high-stress environment of a tournament. It’s a lot different from playing Scrabble on Facebook or Words With Friends on your phone.

2. Practice using the timer. Playing at a local Scrabble club is a good way to do this, or you can play online at www.isc.ro (which requires a free software download). In a tournament, each player has 25 minutes to complete the game (for a total of 50 minutes).

You lose ten points for each minute or fraction you exceed your 25-minute time limit. You don’t want to run out of time in a tight game when you are ahead by just a few points, and end up losing a game you should have won because you ran over your time by a second or two. It happens more often to novices than you might imagine.

3. Start studying word lists. Playing “bingos” (using all seven tiles in your rack on one turn for a 50-point bonus) is how games are won. At the very least, memorize all the combinations of the three most common six-letter stems: TISANE, SATIRE, and RETINA. For example: TISANE + A = ENTASIA or TAENIAS, TISANE + B = BANTIES or BASINET, etc.

4. While we’re on the subject of word lists, you should have the 101 acceptable two-letter words down cold. These are essential because they provide the “hooks” that will allow you to connect the tiles on your rack to words that are already on the board.

Among the most frustrating Scrabble dilemmas is having a beautiful, high-scoring bingo on your rack with no place to play it. You should start working on the three-letter words, too. You may want to invest in a Scrabble word book that contains all the important word lists.

5. As obvious as this may seem, be sure that all your arrangements are handled well in advance. That includes paying your entry fee and making your hotel and transportation reservations.

Many tournaments are held in hotel conference rooms or ballrooms and provide entrants with deep discounts on rooms. Arrive the day before and get a good night’s sleep so you’re relaxed and ready for your first tournament. Don’t forget to eat breakfast!