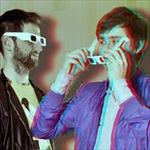 The first group that comes to mind when geeky musicians are the topic is Weezer. Don’t get me wrong – I love their music at certain times, and there is nothing about them being geeky. But there is this other group that I really like listening to, and they have lately been labeled as geeks as well.

Ever heard of Keane? This is the European band that brought us hits like “Everybody’s Changine” and “Somewhere Only We Know.” Musical style aside, the reason for the group being labeled as geeky is the fact that they did something along those lines.

On the night of April 2, Keane became the first band ever to broadcast one of their concerts on the web. Even geekier, they did it through 3D. Now is that cool or what???

They performed a set at the world famous Abbey Road studios while all the wizardry of technology surrounded them, bringing their performance live to all their fans who were avidly watching this groundbreaking event. Naturally, the fans who heard about this gig were rushing out to the stores before the event – to get themselves a pair of 3D glasses. That is, if they didn’t have them lying around the house somewhere.

And what do they have to say about being called geeks? Well, true to form, the band members are loving it! Come to think of it, they have never been strangers to technology – even their music is filled with it. What can I say? Geekiness is an art. It is artistry!