OK so wow, Recipe Finder! It’s a brand new site that helps people sift through the many recipes available on the Internet — over 1,121,131 recipes and counting as of this writing. Actually if you do some poking around, Recipe Finder is an actual search engine specifically designed to crawl the web for food items. Like in Google where you can customize search by images or timeliness, Recipe Finder can sift through the web using length of time prepared, serving size and calorie count. But today that’s not important — we’re here to see whether this baby can scour the web for the odd stuff. You know how the oddest of things can be found on the Internet — so let’s see what the deepest recesses of the web can bring forth to the dining table

I wonder if they have recipes for cannibals.

With over 1 million recipes, there’s probably something out there that’s really obscure. Let’s do a quick search for “people.”

Ah OK. Figures. Gingerbread people, meals for two “people” .. but wait a minute. What’s this on the sidebar under “suggested.” 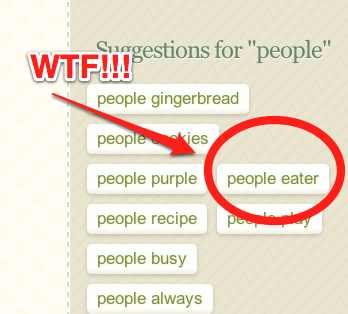 Oh my god! Could it be? They’re actually serving meals for “people eaters.” This I’ve got to see. 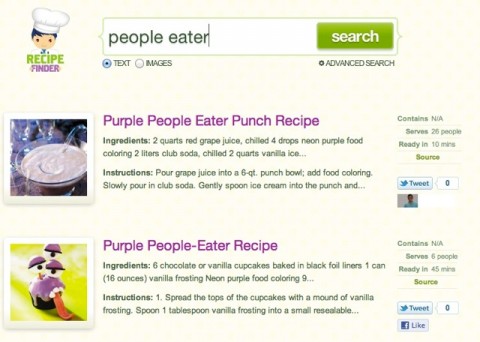 Ah bullcrap. Cute though. You may be too young for this but, the “Purple People Eater” was a meme back in the 1950’s based on a song about a purple monster that wanted to become part of a rock and roll band. Yeah.

Okay moving on. So we definitely can’t find cannibals. Let’s see if we can find something controversial to the tastes of organizations like Green Peace. Let’s go for sharks. As you may or may now be aware, shark finning is considered illegal in a lot of places around the world. Here’s a short primer to help you understand the role of sharks in our oceans. So, after scouring the 1 million + database, we’re left with a couple of entries — two seem to be legitimate recipes for shark fillet. And this other one, a cocktail drink. 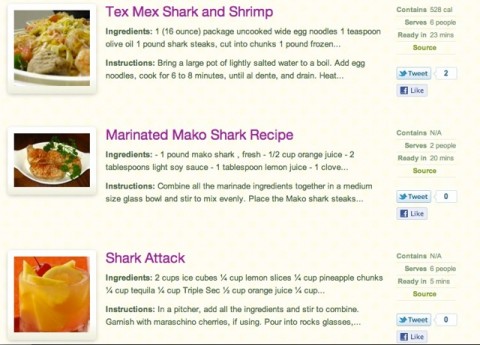 I wanted to see if they kept recipes of domesticated animals like dogs, but the results predictably showed a ton of results for hotdogs, corn dogs and other fancy party fanfare. So then we move on to cats. Everybody loves cats. They’re on the Internet. But are they on Recipe Finder?! 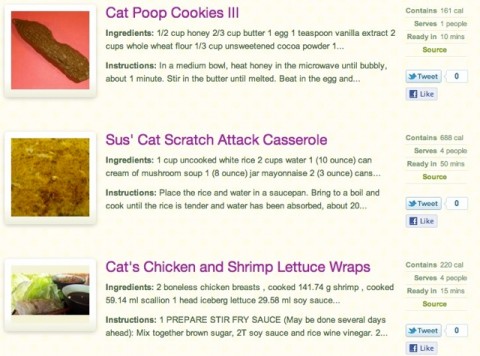 Tadah! Okay so maybe Cat Poop Cookies isn’t what we had in mind but yay to humanity for not succumbing to the evils of presenting felines at the dinner table.

That was an interesting short experiment. My overall verdict is that yeah, you can really dick around this search engine and find the really obscure stuff but kudos to the team for building a rather interestingly huge database collection of food!