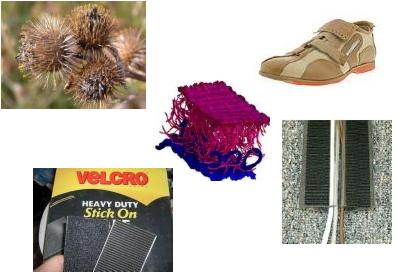 The invention is now celebrating its 50 year anniversary and many have used it yet not even known the name of the humble hook and loop thingy that makes the distinct rip sound without actually ripping, VELCRO. As it turns out, the product was initially patented by a Swiss engineer, George de Menstral in 1941 while on a hunting trip in Switzerland. He was intrigued at how cocklebur seeds clung to his socks and dog by the way and wondered what significance a product that could mimic the said seed and the wonders it would do for daily life, he let it off as another idea into the magic bag of tricks. After a decade, he came about the idea again and became serious about the incident and started work on a man-made equivalent to the errant seed that stuck to almost anything.
Under the microscope, the cocklebur seeds had many tiny hooks that clung or hooked onto the woolen pants that he was wearing that one day he was hunting in the Swiss mountains. Wool as we all know is made from fibers out of the coats of sheep and they had a natural loop that allowed the bush’s seeds to hook onto. He first tried to make the device out of cotton which failed, settling on nylon as a better solution to the problem. The nylon was spun and then cut to form the hooks that were needed to closing to the loops which was made of fibers loosely wound onto a mesh packing. The invention failed to catch on for a while for fashion designers saw it as ugly and very unappealing for their clothing lines. The only people who loved the stuff were those guys in space who hated the hassle of having to do zippers in space as they put on and off their space suits.
Little did people know that the stuff is to become mainstay of sneakers and much other stuff we take for granted today. Nearly all models of shoes have a piece of Velcro on them and modern life would be impossible without it. It has you sealing up the duffel bag you carry your stuff in, it holds your tents and other stuff together, car seats are held up by them and of course the sneakers which have benefited the shoelace challenged folks of this earth for so long. Out with the lace and in with the rip, the ripping Velcro that is. Many fail to see that Velcro is a brand name and refer to all those fasteners on the market as such. Little do they know that the brand has existed for quite some time and that may be the reason why infomercials refer to them as simply fasteners or hook and loop fasteners.